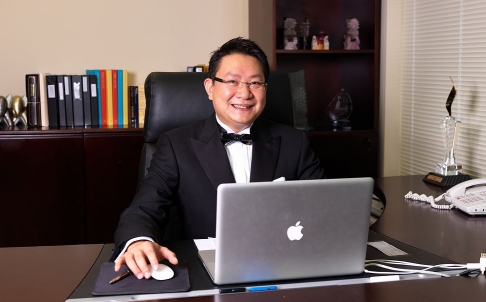 From only two employees working in a warehouse smaller than 60 square metres, the company has grown to become an industry leader recognised globally. It offers more than 1,000 models of battery packs and power adapters under the Dr Battery brand.

Dr Power's market reach spans more than 1 million households in 50 countries. In Europe, for example, the Dr Battery brand is recognised in 13 countries and growing.

A sense for business

As a college student working at a local computer store in Vancouver, Canada, Huen saw how expensive desktop computers were in 1997. When their prices dropped after a couple of years, consumers had extra money for computer accessories. Demand for peripherals, such as large monitors and laserjet printers, escalated.

After graduating from the University of Western Ontario in 2001, Huen was asked by his father to return to Hong Kong to manage their business. The family has had a factory in China for a different product line for more than 30 years. Huen returned to Canada after a year, eager to make his own mark in the business world.

Laptops were the latest craze at the time. Recalling his prior experience, Huen correctly predicted that laptop prices would eventually drop, pulling up the demand for laptop accessories. To capture the opportunity, he decided to manufacture replacement batteries. Huen's product choice was simply brilliant.

"The major accessory for a laptop is not the monitor because a laptop already has one. It's also not the keyboard or mouse. It's the battery more than anything else," Huen says.

To ensure quality products at reasonable prices, Huen travelled to China to search for good suppliers. Dr Power was keen on working with companies that shared its vision of upgrading the quality of products coming from China. Because Huen was born in Hong Kong, he knew the local manufacturers well. Through joint ventures, he and his partners upgraded the factories and relocated some of them to better production facilities.

"Throughout the years, we stayed on track, and together with our suppliers, pursued the highest standards of quality," Huen says. "Today, I think we can safely say that the world's perception of the products coming from China has changed for the better."

Dr Power has six production lines capable of producing more than 100,000 pieces per month. All products are manufactured in ISO-certified facilities with testing capabilities that meet Conformite Europeene's and Underwriters Laboratories' standards.

Two technology collaborations at the turn of the decade were critical to Dr Power's success.

The company teamed up in 2009 with Boston-Power, a portable power specialist from the east coast of the United States. Dr Power used Boston-Power's next-generation lithium battery technology, the Sonata, to create the Green Series batteries. By combining chemical formulation, mechanical innovation and electrical design at the battery cell and system levels, Boston-Power created longer-lasting batteries.

The first in the industry to offer a three-year warranty, the Green Series retains about 80 per cent of its original power even after more than 1,000 recharges. The product line also ensures a lower long-term ownership cost as it lasts up to five times longer than other battery brands. This translates into less environmental impact.

This technology helped Dr Power in creating the Advanced Pro Series battery. It is the world's first battery pack that can withstand extreme operating temperatures.

Advanced Pro Series can operate properly across a temperature range of between -20 degrees Celsius and 60 degrees. A patented salt formula in the electrolyte endures heat and does not react with moisture.

The ordinary electrolyte in other battery brands is heat sensitive and reacts to moisture. As such, they can only function properly within a temperature range of 0 degree Celsius to 35 degrees.

Advanced Pro Series also features an energy-density design that gives it a longer running time than conventional batteries. It recharges back to at least 70 per cent of its original power even after more than 800 recharges. Other battery brands experience significant performance degradation when approaching 300 recharges.

"We were one of the first companies to go back and connect with research companies to put specialised and highly developed technology into practical use," says Fan Chun, chief financial officer of Dr Power. "Our collaboration with Boston Power and Leyden Energy allowed us to pursue product development and choose the raw materials or battery engineering design we want to use."

Keen on bringing these western technologies into China and managing costs, Dr Power moved the office of its chief technology officer to Hong Kong and its research and development (R&D) department to Shenzhen. Tasked with product innovation and development, the R&D team in China comes up with 15 new generic battery models per month to ensure that Dr Power has the widest range of stock and remains on the cutting edge of innovation in the battery industry.

The company, however, did not limit its research to batteries.

Dr Power spent two years of research on its new line of light-emitting diode (LED) bulbs. Launched initially in Canada, the Dr Bulb brand features significant energy savings of up to 85 per cent. The LED product line lasts for about 40,000 hours, which is 15 to 20 times longer than a halogen bulb lifecycle.

"All our products revolve around the core themes of high technology, energy savings and environment protection," Huen says. "We are always ready to accept change and innovation."

In line with this principle, Dr Power has also been developing its own line of electric bicycles, the E-Bike.

Huen was on his way to one of the China factories when he had an epiphany after passing by a large number of people riding electric bikes. He wondered if the same strong demand could be replicated in North America, especially Canada.

Figures point to a large potential demand for e-bikes across North America. While global demand for e-bikes is at about 2 million units yearly, Canada buys only about 20,000 of them. Although Canada is inclined towards using electric vehicles, Huen foresees that such a mode of transport may take some time to take off in Canada because of the required infrastructure support such as charging stations. E-bikes, therefore, presented a promising alternative.

The E-Bike can run up to 70km after four to six hours of charging. Unlike ordinary e-bikes where the motor is attached to the front or rear wheel, Dr Power has placed its motor at the centre sprocket making the E-Bike look like an ordinary bicycle.

The company has reached out to potential customers. Dr Power has started planning an e-bike pilot project with BC Hydro and is also negotiating with the provincial government of British Columbia for a bike-share programme for its staff. To handle manufacturing, Dr Power has established a joint venture in China.

Despite its success, the company continues to break new grounds.

Dr Power is also looking into waterproof batteries for military and government equipment such as two-way radios and handheld global positioning systems.

The company is keen on collaborating with regional distributors to reach areas where e-commerce has not yet taken off.

These include countries such as India and China, where demand for computers, communication devices and consumer electronics has grown rapidly.

As dusk falls on its headquarters along Jacombs Road in Richmond, British Columbia, Dr Power's offices and plants in China are just starting the day.

The company has become a non-stop global enterprise changing the face of the industry one step at a time.